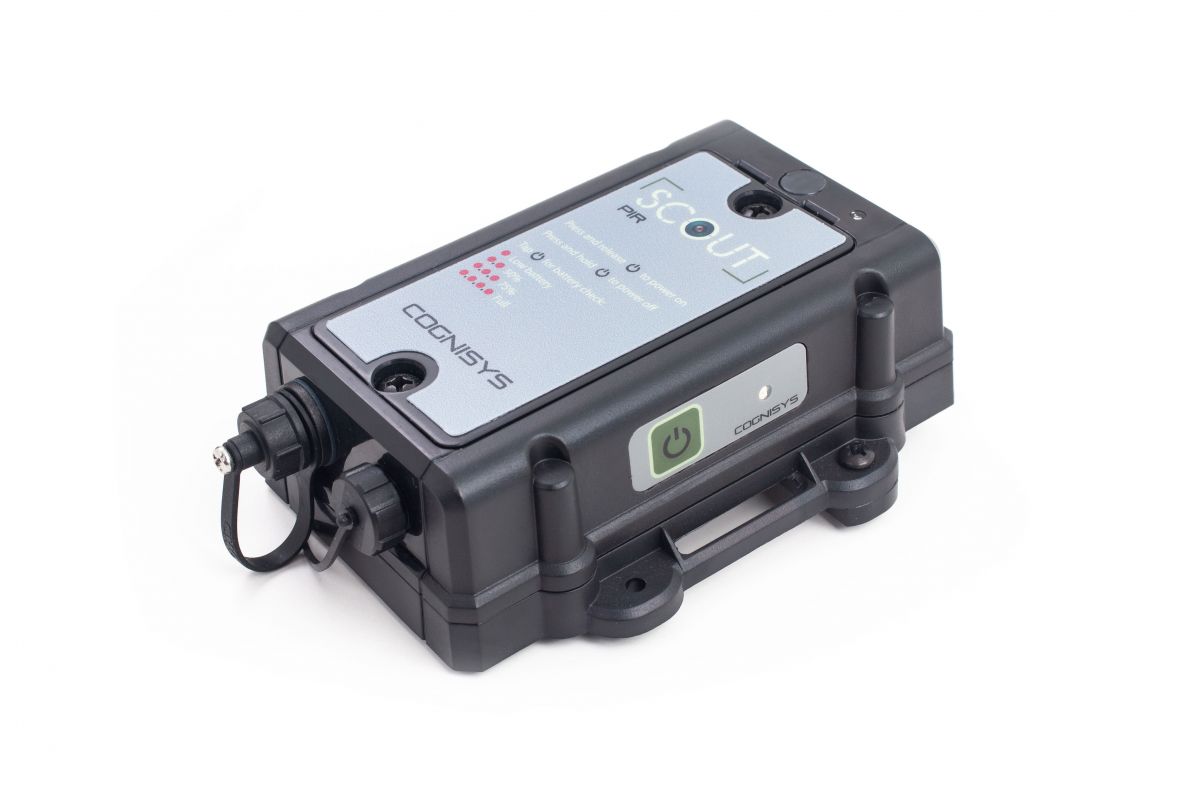 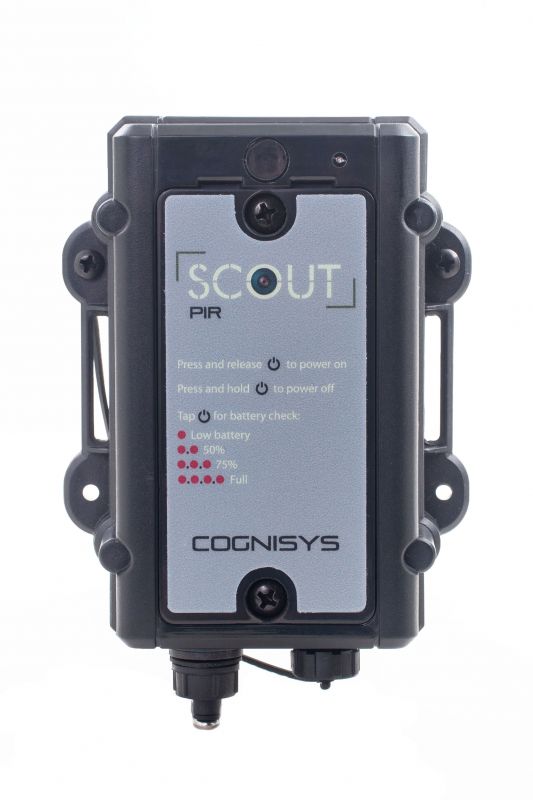 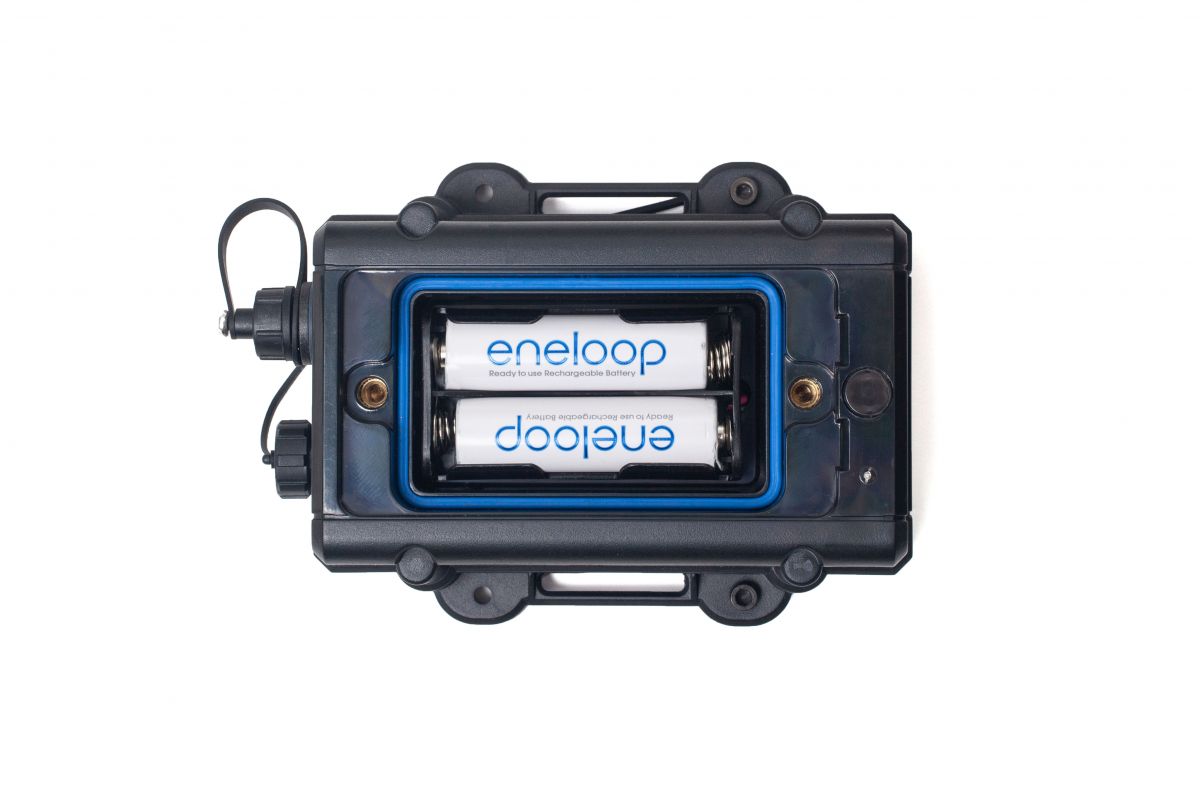 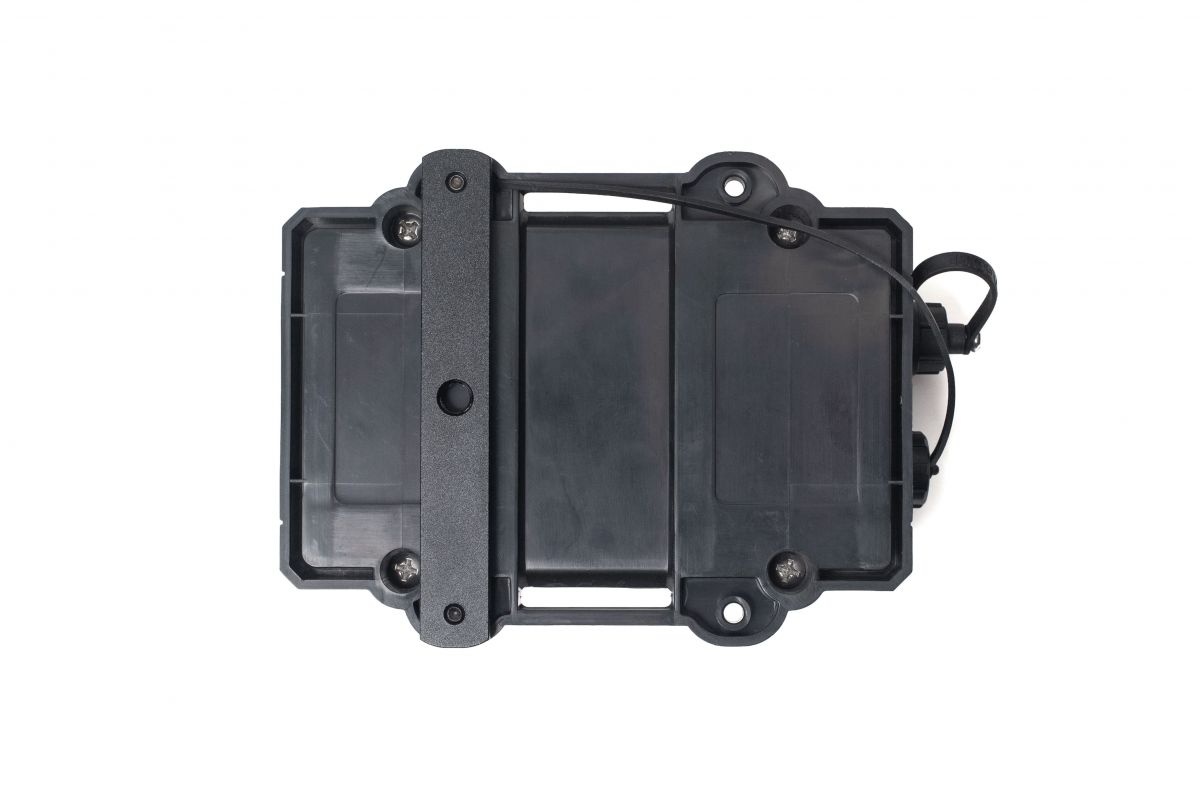 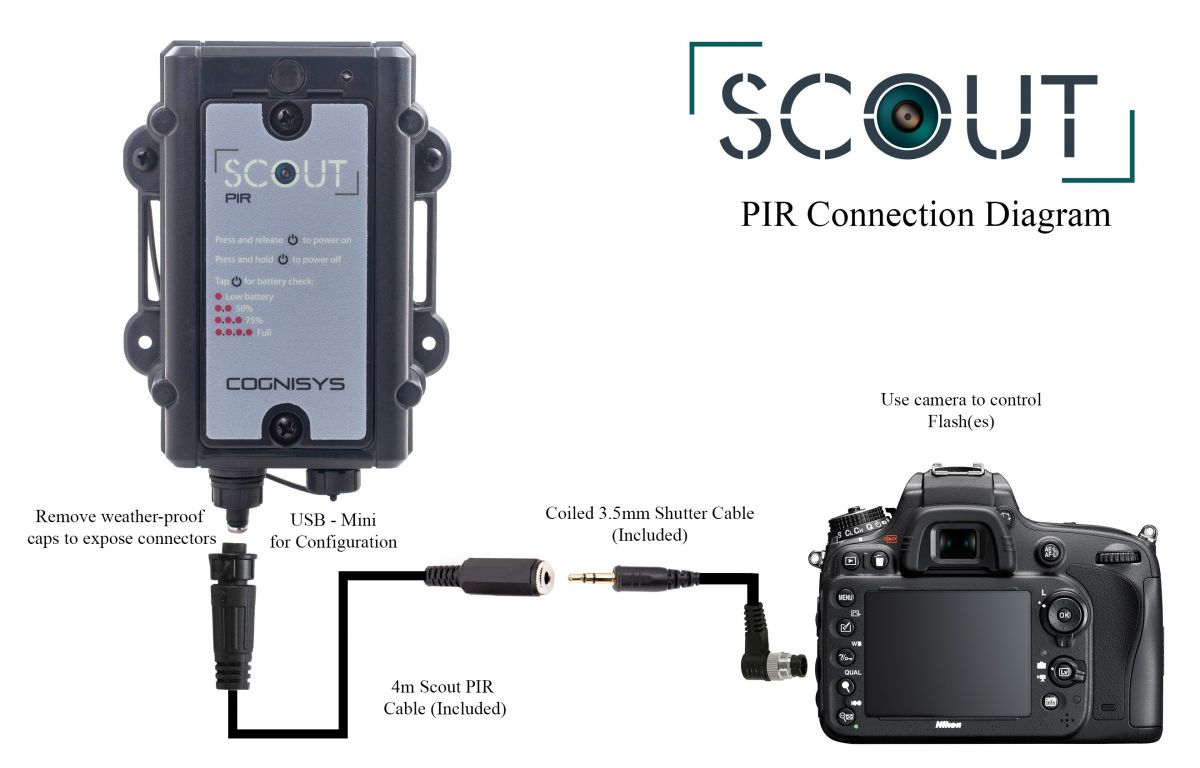 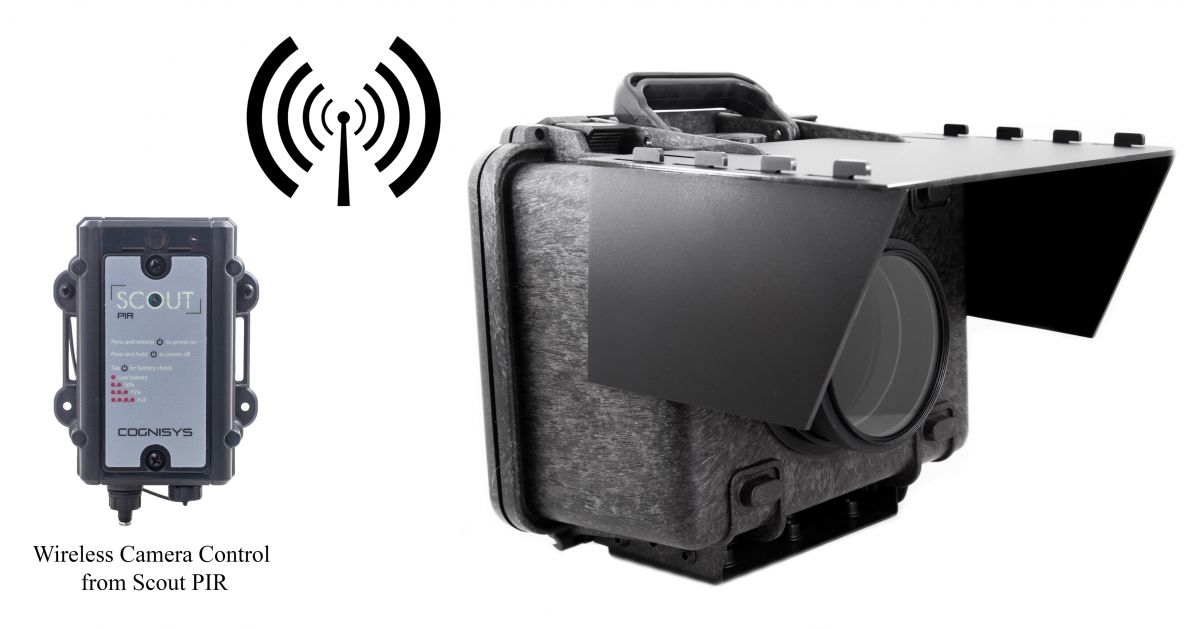 The Scout PIR Sensor is a AA powered, weatherproof, compact Passive Infra Red sensor for long duration camera trapping applications. PIR is a good sensor choice if you want a wider field of view than a beam sensor can provide.

The Scout PIR sensor is our latest addition to the Scout line of camera trapping gear. The PIR sensor is a good fit if you need a wider triggering area than a beam sensor can provide. It also has the benefit of being single ended - no separate transmitter and receiver. When the Scout PIR is used with the Scout Cam-Box the system offers wireless triggering of the camera. The trigger is incredibly easy to use right out of the box but also offers the flexibility of a USB interface to create more complicated configurations. The Scout PIR can also be configured directly through the Scout Camera Box Mobile App. 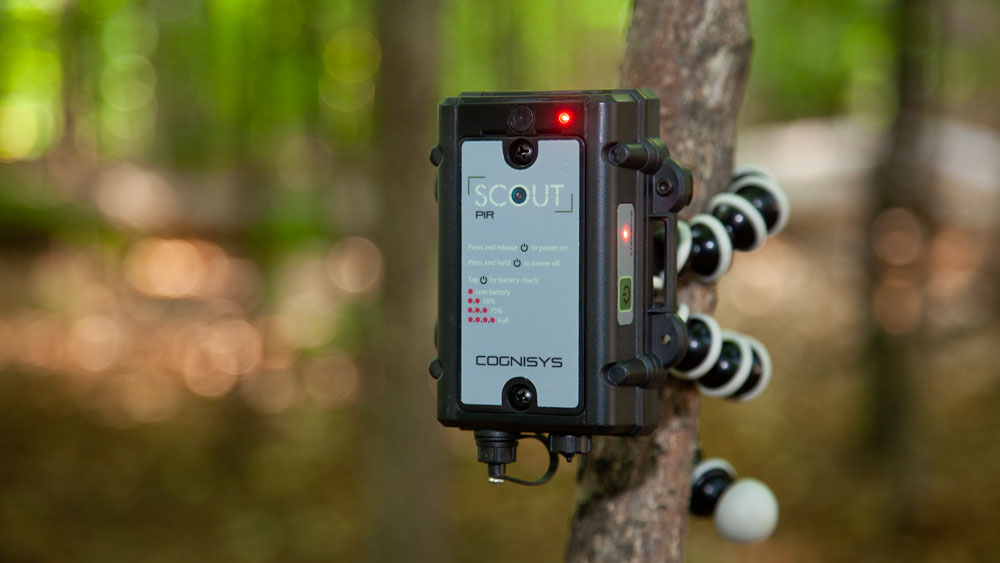 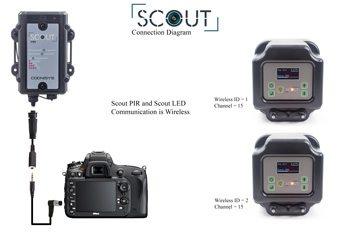 The Scout PIR can be used to trigger the Scout Camera Box to provide a complete wireless camera trapping system. The PIR can also be used to directly interface with the Scout LED (no camera box required).

Connecting Scout to your camera 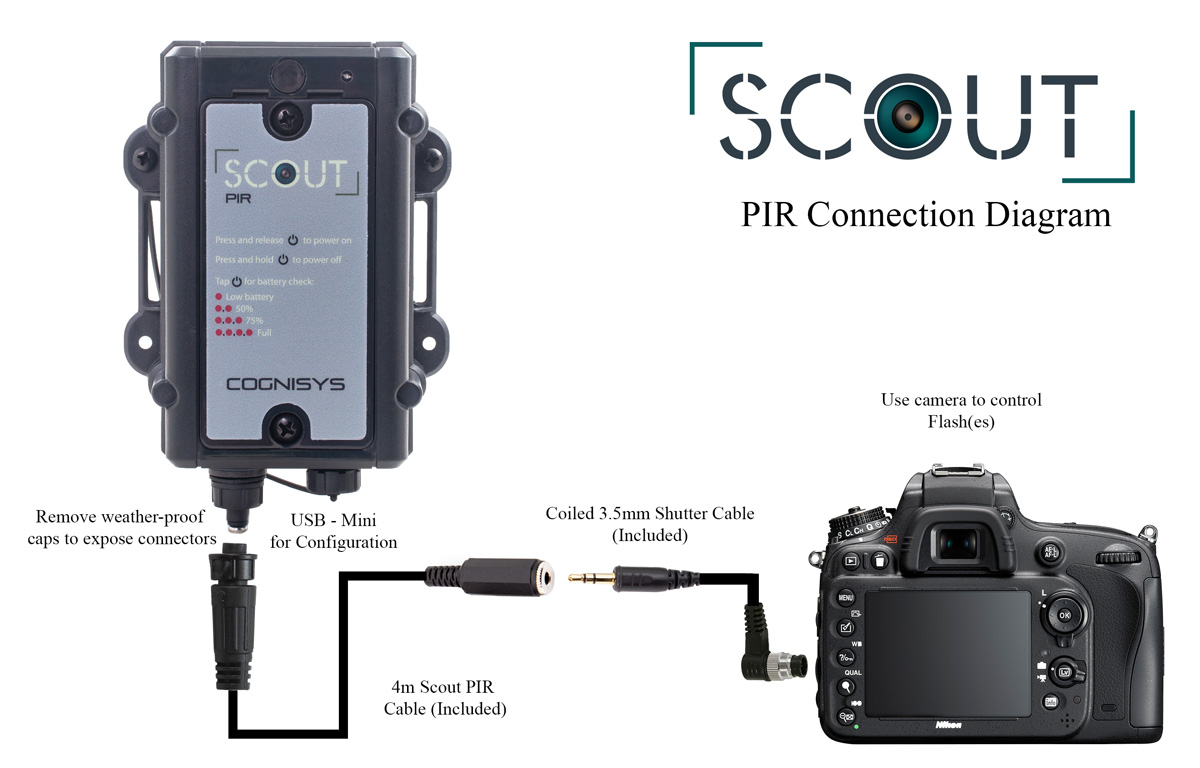 You can also use Scout to stop and start video recording on your Sony camera with this optional cable.

When to Use a PIR sensor

Everyone knows if you want the best results you need to use the right tool for the job. The same goes for sensors. If you are after a tack sharp still image of a visiting mountain lion - use a beam sensor. If you are shooting a video where you want to see the subject enter the frame the PIR is the right choice. PIR has a wider view so it is perfect for this application. Another consideration of PIR is that it is more prone to false triggers than a beam sensor is. If camera battery life is a huge concern and your don't have enough power budget for some false triggers then you should use a beam sensor. The beam sensor is more expensive but it does have some fairly significant advantages for certain applications.

The Scout PIR isn’t a beam-break sensor. It is a heat sensor that has a “cone” of area where it looks for abrupt changes in heat. As PIR sensors go the Scout PIR Sensor has a fairly narrow beam width (that’s a good thing!). Understanding what this “cone” looks like is the first step to a successful setup.

The image to the right shows the cone where the PIR is "looking". 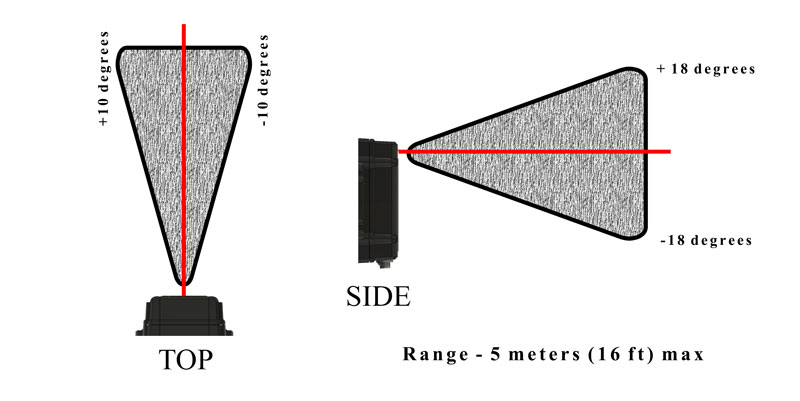 1. Stay aware of what the PIR sensor will "see" in its cone as shown above

2. The closer the sensor is to the subject the more likely you are to detect it (or the smaller it can be).

3. If possible, position the sensor so it won’t be seeing motion from your natural environment.

A good example of this is trees - trees by themselves aren’t a problem – but trees moving from the wind might be. If the branches are moving slow enough in the wind it likely won’t be a problem. If, however, the sun is shining brightly to warm the leaves and they start blowing around in the wind all of the sudden you have a hundred happy dancing heat signatures in the PIR’s “cone”. It is important to keep these types of scenarios in mind when setting up.

4. Try and orient the sensor so it is facing North(ish). This has two benefits. First, the sensor won’t be looking at the fiery orb in the sky appearing and disappearing behind leaves. The second reason for “North” is avoiding the Sun shining directly into the sensor. It won’t cause damage but it WILL cause a temperature shift compared to the ambient temperature which could cause false or missed triggers.

5. Set your sensor off the ground by a reasonable amount. Nature is dynamic (a polite way of saying that she’s out to get your camera setup). Grass grows quick (a different flavor of the tree issue). Rain can cause dirt to splash back on the sensor partially or totally blinding it (think of driving into the Sun with a dirty windshield – what do you see?).

Obviously we don’t live in an ideal world and guidelines #3 & #4 can sometimes be difficult (or impossible) to accomplish. Is there a plan B? Absolutely! This is when adjusting the “sensitivity” comes into play. Chances are those leaves and branches are further away than the subject is that you’re trying to photograph. You can turn down the sensitivity enough so that it will ignore the further away potentially false triggers while still working fine for the camera trap setup. If you’re especially paranoid about excessive false triggering, you can always enable the “Shot Limit”. Check out the owner's manual for more details on the sensitivity and shot limiter.

Using the PIR with the Scout Camera Box 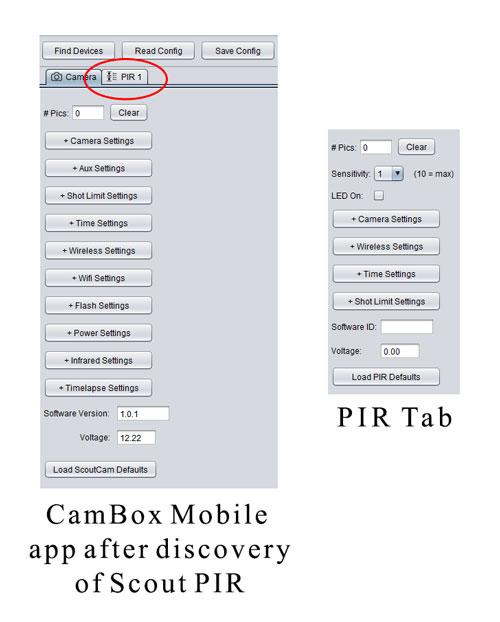 In addition to changing the parameters through the mobile app of the camera box all of these same parameters can be configured through the on board USB port of the Scout PIR Sensor. 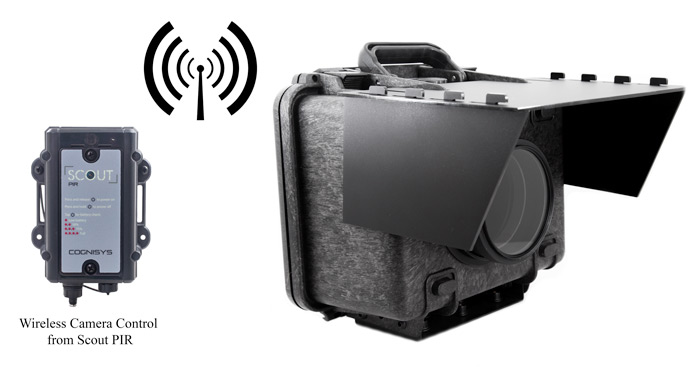 Foxes in 4k from Roy Dunn on Vimeo.

This 4k video was captured by Roy Dunn in southern California using the Scout PIR, The Canon 5D MkIV and the Scout Camera box. This setup had been deployed for five days when this video was captured. How is this camera kept in video mode for that long? There is some very careful setup required but the flexibility of the Camera Box makes it possible. While the Canon 5D MkIV can be put into a mode that allows a video to be captured with the remote shutter port (the first Canon ever with this feature) it normally will go into a deep sleep mode after 30 minutes. You can wake it up from this deep sleep mode but the camera wakes up in still mode - no more remotely triggered video! To make remote deployment of this camera possible for video it is necessary to wake the camera up every 28 minutes to prevent it from going into deep sleep and resetting the video trigger mode. This is done with the Scout Camera Box sending a periodic half press every 28 minutes to keep the camera from deep sleep. The camera also needs to have the auto power off set to the shortest duration of 1 minute to save battery life.

It took Roy some serious experimenting to get all of this sorted and reliable... Thanks Roy! In this setup Roy also uses the Aux output of the Scout Camera Box to turn on the LED video lights. The video record and the powering up of the video lights is kicked off with a wireless signal sent from the PIR sensor to the Scout Camera Box. You can see more of Roy's work on his website: HumansToHummingbirds.com

Reviews
Write Your Own Review
FAQs

Which Scout sensor type (Beam or PIR) is best suited for my application?
If you are not certain exactly where your subject will be or if you need a wider field of view then the PIR sensor is the right choice. PIR is great for video when you want the recording to start before the subject enters the frame. However if you know the path your subject is taking and you want a super sharp still image then beam sensor is probably the right choice. There are also other considerations like size, ease of setup, cost, and susceptibility to false triggers they will likely come into your decision.
What kind of batteries can I use in my Scout PIR Sensor?
Scout is compatible with all AA style batteries including alkaline, NiMH (rechargeable), and Li AA batteries (like Energizer Ultimate Lithium Batteries).
Why does the PIR Sensor take so long to initialize when I first turn it on?
When power is first applied to the PIR sensor the output is unstable, it takes some time for the PIR elements to stabilize and give valid results. The software in the Scout PIR Sensor monitors the PIR element output and will not send a signal to fire the camera until it has detected the PIR sensor elements have stabilized. The startup time may vary from power up to power up depending on the external conditions.
What type of mounting options are available for Scout?
The Scout PIR Sensor is supplied with a black anodized aluminum tripod mount - it has a 1/4"-20 threaded hole for mounting it to a tripod. There are also slots molded into the housing to accept straps or zip ties if needed.
Can I trigger video with the Scout PIR?
This very much depends on your camera - if your camera allows for starting and stopping video recording through the remote shutter port then you are good to go with Scout. If you are using a Sony camera you can trigger video using our Sony Video Switch. Nikon has also recently started adding this feature to their cameras. Most Canon cameras only allow video recording through their IR port, the Canon 5D MKIV is an exception.  The Scout Camera Box supports IR but it cannot be done directly with the Scout PIR.
Can I control the Scout LED's from the PIR Sensor?
Yes, the Scout LED's can be controlled directly with the PIR sensor with or without the camera box. You can configure the delay, and on and off times directly from the Scout PIR sensor.
Have additional questions about ordering and shipping?
Visit our general FAQ page.
Specs 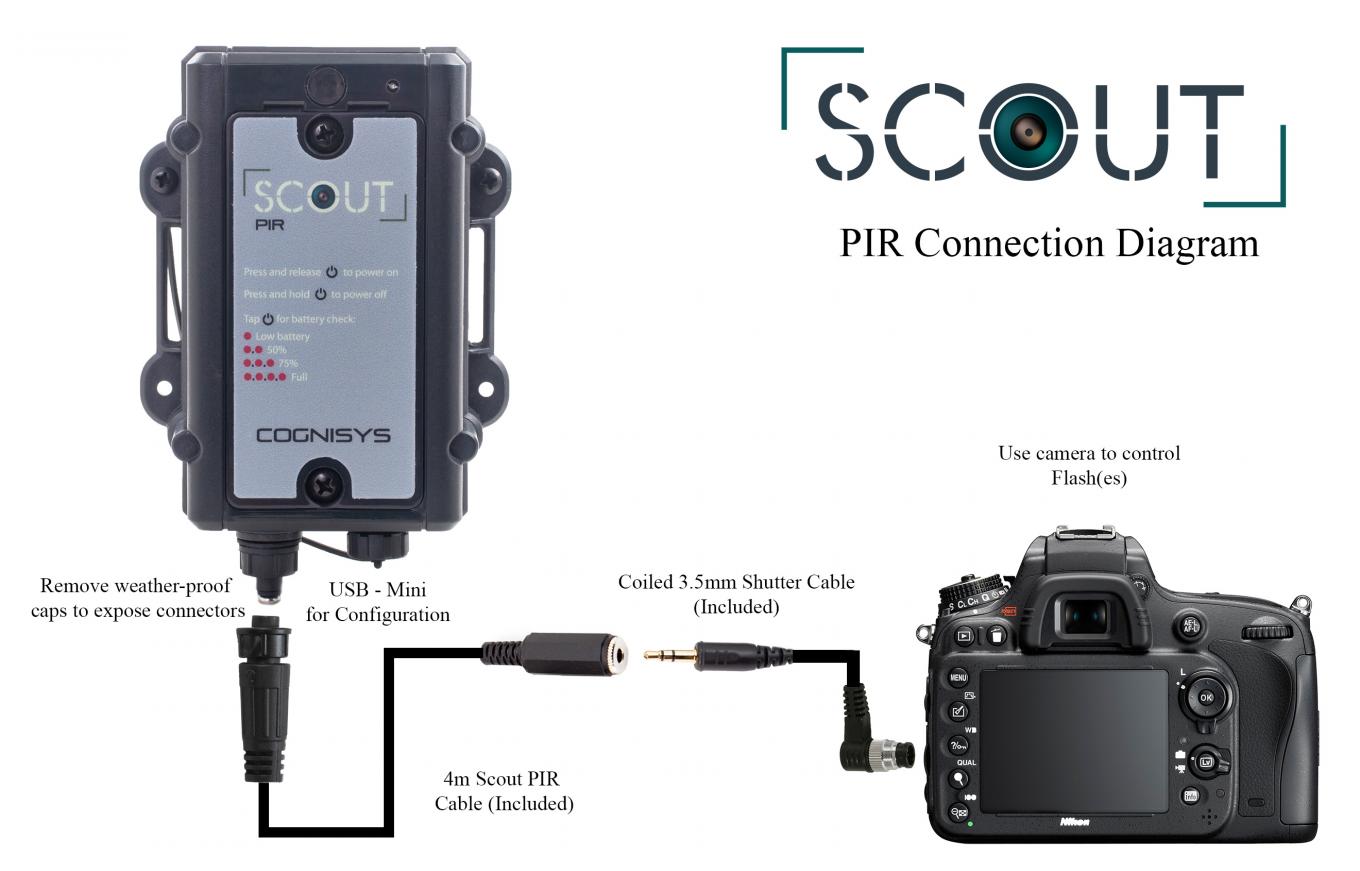 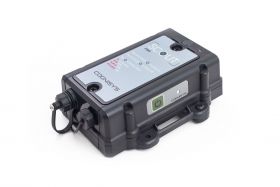