Using the Aux Output to Wake Up a Speed-lite Flash

Using an Aux Output to Wake Up Flash

The ideal camera trapping flash would go to sleep after a short period of time helping to save battery power, after being asleep for a long period of time it would wake up and instantly be ready to go. Real world flashes however don't work this way and camera trappers are forced to make compromises. Sometimes this means tossing the first frame because the flash wasn't ready - sometimes this is fine - other times it just won't work because the exposure is too long and the critter will be long gone after the first shot. This page describes a method that can be used to wake up a flash before the shot using the AUX 1 output of the Scout Camera Box.

Current flashes have many short comings when it comes to camera trapping. The batteries aren't large enough, not all of them can be woken up after going to sleep, and if they can be woken up they aren't ready for several seconds after wake-up. Certainly some flashes are better than others but so far we have not found one that is ideal. We do plan to address all of these issues with the release of a Cognisys Scout Camera Trapping Flash sometime in the first quarter of 2019 but until then camera trappers need a reasonably easy way to implement a work around. The work around shown below is geared towards the SB-28, a very popular flash in the camera trapping world. This configuration will work with other flashes but the timing will likely be different. When setting your flashes up it is important to work through these details and the timing before deployment of your camera trap. Some flashes have a "Standby Mode" and a "Sleep Mode". Not all flashes can be woken up after entering the deeper "Sleep Mode", the Yongnuo YN-600EX-RT II is one such flash. You will want to make certain you leave your flashes asleep for 24 hrs to be certain they can be woken up after a longer period of sleep. This page will walk you through how to use one of the 3 Aux outputs to wake up the flash when using wired flashes.

How to Connect the Flashes 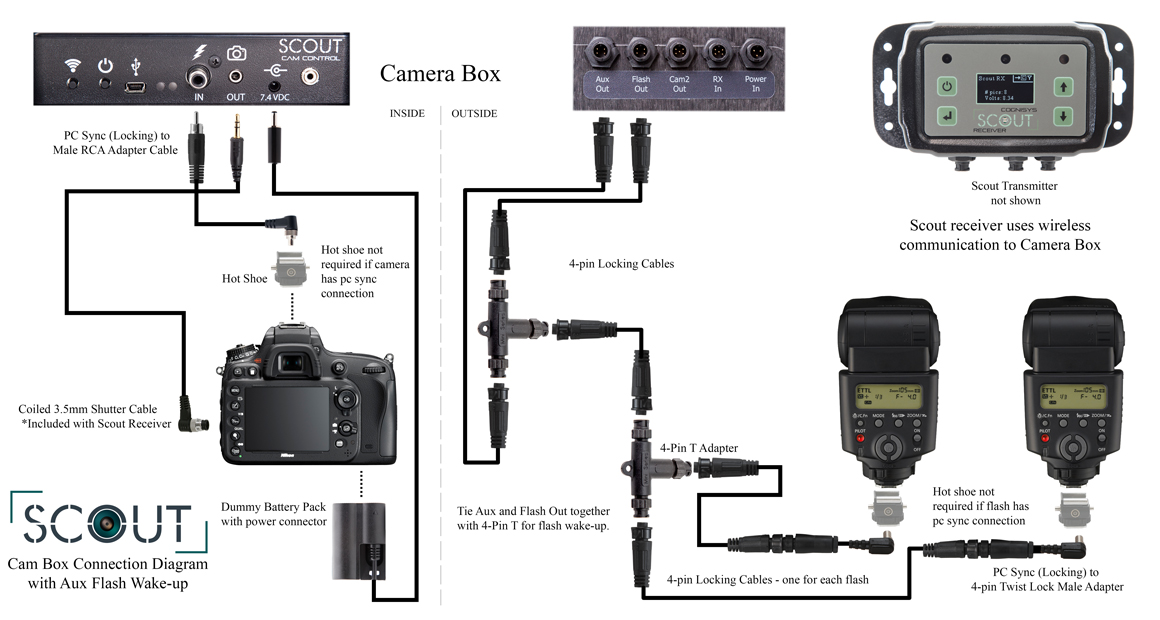 This diagram is the nearly the same as the diagram on the Connecting Your Scout How-To page with one important difference. This diagram has an additional 4 pin cable connected from the AUX OUT to the flashes via a 4-Pin T adapter. This connection allows us to send a signal to the fire pin of the flash without triggering the camera. These cables are all available for purchase on the page Camera Box Flash Wiring.

The additional connection from the AUX 1 to the flashes allows us to control the flash fire pin without triggering the camera. In this scenario the AUX OUT is configured to fire as soon as one of the sensors detects the subject. The 1/2 press signal is sent simultaneously to wake (but not fire) the camera. The delay between 1/2 press and full press should be configured to the amount of time it takes your flash to wake-up and be ready to fire. This time varies greatly from flash to flash so you will want to measure it for your flash. This ready time is one of the reasons the SB-28 flash is very popular for camera trapping - the SB-28 has a very high quality capacitor, that has a very low self discharge rate allowing it to be ready in a shorter period of time than other flashes. The low discharge rate means the flash can be ready quite quickly even after a long sleep duration. I would not recommend a delay between the AUX out and firing the camera of less than 2 seconds. And even two seconds is pushing it, if the capacitor in the flash is fully discharged (the flash has been sleeping for several days) it can take as many as 4 or 5 seconds to be ready. This number is a trade-off between the flash being ready and the delay between when the subject is detected and the image is taken. If this delay is too short the flashes will not be ready when the camera fires. If you are using a short exposure time this is not the end of the world as the flash will fire on the next shot. If you have a long exposure this becomes more critical as your next shot will not happen for a long time - likely resulting in a missed opportunity. Keep in mind this delay will be present in all the triggers from the sensors.

The Aux 1 Off-Time 1 should be set to the amount of time it takes for the flash to go to sleep. This Off Time will keep the Aux Output busy so it will not fire the flashes twice when the flash is awake. If this is set to zero the flash will fire once when the sensor first sees the subject and again after the Aux delay discussed above. Since we are only using one picture we also need to check the "Final Off" check box which will force the camera controller to keep this line low even though another pulse is not coming. Some flashes (like the Godox TT685) will still fire after the display turns off so make certain you verify this time period with the flash you will be using.

Here are the changes that need to be made in the Scout Camera Box App to utilize the Aux Output to wake the flashes. Make certain to save your settings after the changes. 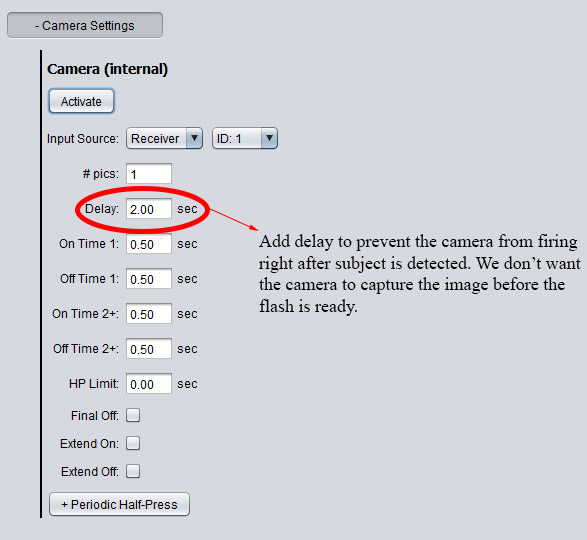 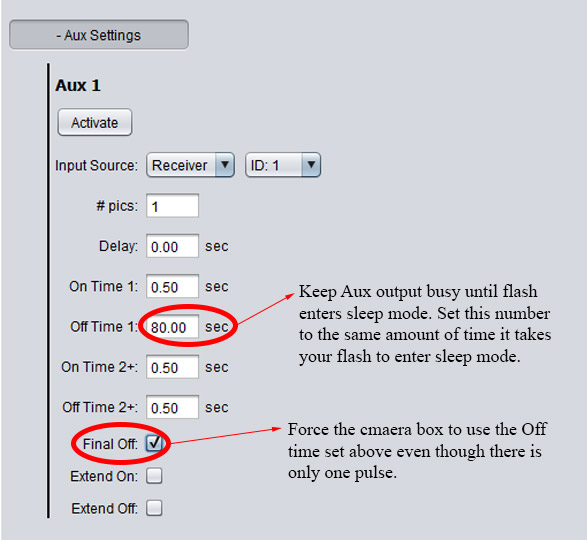 Again make certain you test this with your flashes and adjust the timing as needed. I would recommend testing it right after the flash goes to sleep as well as testing it after the flash has been asleep for at least 24 hours. This will ensure the system works for all situations.

Be the first to review this product